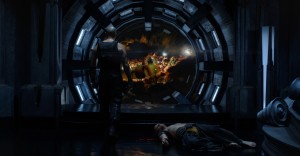 Some of you have been asking for dish on this new cut of RIDDICK, available now on iTunes and dropping January 14 on DVD.  Well, the Director’s Cut is probably 8-9 minutes longer than the theatrical version.  The bulk of that time comes in two areas — several new scenes in the flashback sequence that shows how Riddick’s tenure on the Necromonger throne was a troubled and dangerous one (this includes a lot more of Karl Urban), and a new coda that sees Riddick returning to the Necro armada to seek out Vaako, the man he believes double-crossed him.  All told, we probably created 50 new VFX shots just for this extended cut.

BTW, I hate the cover art for RIDDICK: THE COMPLETE COLLECTION.  Someone should’ve run it by me first.

Tags: Diesel, Director's Cut, Karl Urban, RIDDICK, Twohy, UnderVerse, Unrated
Share
Related news
STILL MASTERING THE REMASTERING OF “PITCH BLACK” 1 year ago
DOWN BUT NOT OUT 2 years ago
ROBBY THE ROBOT CRUSHES IT 4 years ago
11 comments
Leave a reply