Well, records were made to be broken…

Robby, the mechanical caliban from the 1956 classic FORBIDDEN PLANET, just sold for the holy-shitballs price $5,375,000.  That’s a record for any movie prop, topping other revered memorabilia like the Maltese Falcon statuette and the original 1966 Batmobile.

The auction house called Robby “One of the most iconic sci-fi figures to appear on the silver screen.”  I have to agree.  Oh, you can make a case for C3P0 and R2D2 – and maybe even Maria from METROPOLIS — but I think there’s something special about Robby.  He has more mystique.  More presence.  He is seminal. 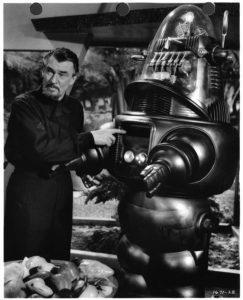 Got me thinking that somebody should reboot FORBIDDEN PLANET,  maybe even for television.  A lot to explore there, what with the backstory of the Krell and the Bellerophon crew.  And while the movie itself was a little talky, it never talked down to you.  It was intelligent science fiction, and hey, don’t we need more of that?

Robby was designed by Robert Kinoshita and built by the MGM prop department.  Kinoshita also designed the Jupiter 2 and Robot B9 from LOST IN SPACE.

Tags: Bellerophon, Forbidden Planet, Krell, Reboot, Robby the Robot, TV Series, Twohy, Walter Pigeon
Share
Related news
STILL MASTERING THE REMASTERING OF “PITCH BLACK” 2 years ago
DOWN BUT NOT OUT 3 years ago
ROBBY THE ROBOT CRUSHES IT 5 years ago
3 comments